The core idea behind the second principle is entanglement. Upon reading the principle, one might be inclined to think that entanglement is simply strong correlation between two entities – but entanglement goes well beyond mere perfect (classical) correlation. If you and I read the same paper, we will have learned the same information. If a third person comes along and reads the same paper, they also will have learned this information. All three people in this case are perfectly correlated, and they will remain correlated even if they are separated from each other.

Quantum entanglement is a bit more subtle. In the quantum world, you and I could read the same quantum paper, and yet we will not learn what information is actually contained in the paper until we get together and share our information. However, when we are together, we find that we can unlock more information from the paper than we initially thought possible. Thus, quantum entanglement goes much further than perfect correlation.

To demonstrate this, we will define the controlled-NOT (CNOT) gate and the composition of two systems. The convention is to label states by writing the first qubit’s name in the rightmost position, so that we can easily convert from binary to decimal. As a result, we define the tensor product between operations and by .

Taking as the control and as the target, the CNOT with this representation is given by

which is non-standard in the quantum community, but more easily connects to classical computing, where the least significant bit (LSB) is typically on the right. An entangled state of the two qubits can be made via an gate on the control qubit, followed by the CNOT gate. This generates a particular maximally entangled two-qubit state known as a Bell state, named after John Stewart Bell (learn more about Bell and his contributions to quantum physics and entanglement).

Experiment with the Bell state¶

To explore this, we can prepare an entangled state of two qubits, and then ask questions about the qubit states. The questions we can ask are:

Below is a program with six such circuits for these six questions:

Let’s begin by running the circuits for just the first two questions, looking at the results of the zeroth qubit () using a computational and then a superposition measurement.

We find that the result is random. Half the time is in , and the other half it is in the state. You may wonder whether this is like the superposition from earlier in the guide. Maybe the qubit has a perfectly definite state, and we are simply measuring it in another basis. What would you expect if you did the experiment and measured in the superposition basis? Recall that we do this by adding an gate before the measurement…which is exactly what we do in the second circuit.

Once again, all the experiments give random outcomes. It seems we know nothing about either qubit in our system! In our previous analogy, this is equivalent to two readers separately reading a quantum paper and extracting no information whatsoever from it on their own.

What do you expect, however, when the readers get together? We now measure both in the joint computational basis, in the fifth and sixth circuits.

What about if we measure both in the superposition basis?

Here we see that the system also has perfect correlations (accounting for experimental noise). Therefore, if is measured in state , we know that is in this state as well; likewise, if is measured in state , we know is also in this state. These correlations have led to much confusion in science, because any attempt to relate the unusual behavior of quantum entanglement to our everyday experiences is a fruitless endeavor.

Perhaps even stranger than Bell states are their three-qubit generalization, the GHZ states. An example of a GHZ state is .

The measured results should be half and half .

GHZ states are named after Greenberger, Horne, and Zeilinger, who were the first to study them in 1989. GHZ states are also known as “Schrödinger cat states” or just “cat states.”

For further reading, look for N. David Mermin’s article in the June 1990 issue of Physics Today titled What’s wrong with these elements of reality?.

How else can three qubits be entangled? W states are another way to entangle three qubits, with an important difference from GHZ states: W states are more robustly entangled when a qubit is lost. Let’s look at what that means.

We start with our state. In our example, we will “lose” a qubit by measuring it.

Outcome is uniformly random, and the resulting output state is one of

Each of these states is no longer entangled.

What happens if we do the same to ?

The resulting state is now one of

Although is not entangled, is a maximally entangled state of two qubits. Therefore, one might say that the entanglement of the state is more robust than that of the state.

The residual entanglement is useful. For example, we can use it to successfully teleport a qubit two-thirds of the time. Consider the following circuit:

Notice that the same behavior does not happen if we replace the with . If we do that, then , i.e., the output state takes the value of the topmost measurement outcome, and we cannot successfully recover the input state .

You can experiment with this in Circuit Composer. Open your own copy of the W state by clicking below, and compare its outcomes with those of GHZ states. 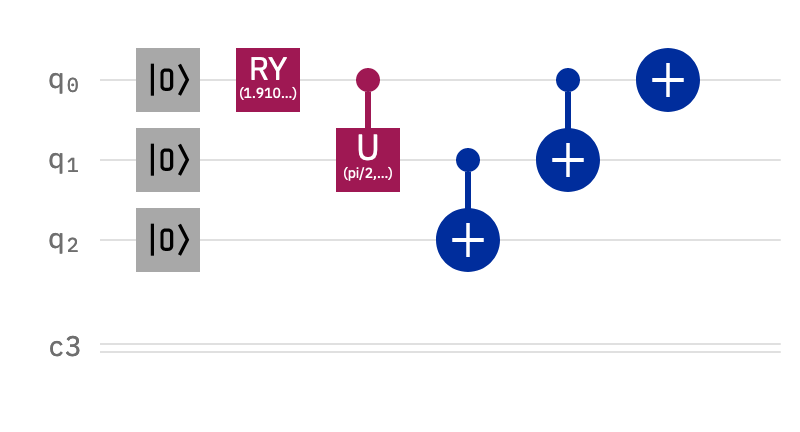